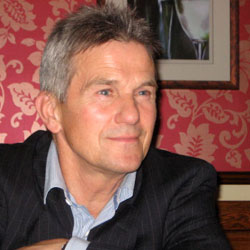 As a Neuro-Developmental Consultant and keen sportsman, Paul is passionate about helping all ages to achieve their potential in education, sport and life itself, specialising in the possible effects of Neuro-Developmental Delay or Neurological Dysfunction on the child in the classroom, ‘Adults’ and the elite performance of sportsmen and women.

Although multi- talented in many areas of sport, Paul’s main successes were in football, playing for England Senior Schools for two years, and as a Professional Footballer with Sheffield Wednesday F.C. Early retirement, through injury, directed Paul towards a teaching career in Physical Education. After studying at Carnegie Physical Education College in Leeds, specialising in exercise physiology and bio-mechanics he played extensively as a part-time Professional Footballer, and became a Head of PE in secondary education.

For the past eoghteen years, this has been extended to teaching and coaching in Primary Education, including working with children and young people in his role as Head Coach, at a large innovative sports charity, One In A Million, OIAM, making a significant difference in deprived areas of Bradford.

As an enthusiastic A License FA Coach, Paul’s experience speaks for itself: ranging from teaching on local to international FA courses, CEO and Co-Founder of Pro-Soccer Coaching UK, coaching in Australia and USA, in addition to Sheffield and County Schoolboys teams’ manager (winning the English School Boys’ Trophy for the first time in Sheffield for 70 years, in 1982 and ten of the team becoming professional footballers). He has coached at Sheffield Wednesday’s Academy and recently finished six years at Liverpool Academy; as a Senior Scout for Yorkshire, Regional Scout, a Development Centre Manager and coach.

Due to Paul’s experiences of teaching and coaching and observing children develop, he found a correlation between their physical ability, improvement and success along with academic progress and achievement, emotional regulation and behaviour.

Whilst teaching movement through sport, he was led to qualify as an Early Development Movement Teacher. Consequently he attended a one year’s post graduate course on Neuro-Developmental Delay at the Institute for Neuro-Physiological Psychology (INPP) Chester, qualifying as a Neuro-Developmental Therapist enabling him to work with children or adults with academic, physical and behavioural problems, affecting them in the classroom, in society or as elite athletes. He has since qualified in Bilateral Integration, Johansen Individual Auditory Stimulation (JIAS). and Irlen Scotopic Sensitivity Syndrome.

The Neuro-Developmental Diagnostic Assessment usually takes the form of a three hour assessment and provides a detailed analysis of current ability levels, helping to identify the starting point for the intervention (s).

Research indicates that approximately 75% of the children (and so adults) with learning difficulties have an immature primitive reflex as a contributing factor (Bender 1971).

Not all academic problems result from immature reflexes, but many academic problems are compounded by reflexive interference.
Dr. Peter Blythe of the Institute of Physiological Psychology said in June 2011, “If sportsmen were checked for aberrant reflexes early on in their sporting life, I am sure this would improve their performance.”

If you would like to find out if we may be able to help you or someone in your care, please complete our Developmental Initial Screening Child Questionnaire or Adult Questionnaire; send an email to info@kinesisconsultancy.com or call 0114 2451502.